THE CZAR OF NOIR MAY NOT RING TWICE BUT HE ALWAYS DELIVERS THE GOODS
Ben Terrall, EatDrinkFilms.com

"But even a screen that covers a living room wall can't compete with one in a traditional moviehouse. Aside from the obvious superior visuals in a non-megaplex cinema, one cannot underestimate the gleeful communal aspect of watching gorgeous crime stories with a crowd of like-minded cinemaniacs, an experience many of us, including yours truly, have missed badly while slogging through too many interminable months of sheltering in place and social distancing. '" MORE

"Subtitled 'They Tried to Warn Us!,' the 2022 festival offers a dozen vintage features with particular emphasis on still-relevant political and social issues. Among the more famous ones are 1947's Crossfire, which daringly addressed anti-Semitism (even if it substituted that issue for the source novel's indictment of homophobia), and peak John Garfield vehicle Force of Evil, whose director Abraham Polonsky (like several talents represented this year) would soon get blacklisted by Hollywood's 'Red scare.'" MORE

"Unlike Mill Valley or SFFilm, NOIR CITY doesn't focus on new, serious films. Instead, this festival presents crime dramas, mostly from the 1940s and '50s – the golden age of noir. These films are dark, both visually and thematically. Visually dark because of the many deep shadows on the screen. Thematically because the stories on the screen tell us that the world is a crime-ridden cesspool. Just read some of the movie titles: The Sniper, On Dangerous Ground, The Killer That Stalked New York, and more." MORE

"I realized its vintage movie palace atmosphere, and the care and upkeep of the venue, would work perfectly for the type of show Noir City loyalists have come to expect," said Muller. And Michaan, who said he and his wife watch three to four feature films a week on TCM, welcomes the opportunity to show movies on the big screen that are "outside of the Hollywood mainstream for a change." MORE

The 12-film, four-day festival is scheduled to run Jan. 20-23, down from the festival's usual 10-day schedule of some two dozen films. This is quite the change for what used to be called the San Francisco Film Noir Festival. The festival's first 18 editions unspooled in the city, primarily at the Castro Theatre. But for the 19th edition, Muller said in a statement that he wanted to show his appreciation for the East Bay historic movie palace that served as Muller's pandemic studio for his "Noir Alley" series on TCM when the network's Atlanta studios were closed last year. MORE

The 2017 incarnation of the world's most popular film noir festival returned to the legendary Castro Theatre January 20�29 with 24 exceptional films exploring, in films both suspenseful and comedic, the desperate lengths to which people will go to beat the system and hit the big time. "The Big Knockover" was a veritable history of the heist film. MORE

NOIR CITY returned to San Francisco's majestic Castro Theatre for its 14th edition, January 22-31, 2016. Its timely theme, given the threat traditional arts face from the technology revolution and its accompanying skyrocketing living costs, was "The Art of Darkness"—a collection of 25 noir-stained films exploring the pressures, pitfalls, paranoia and pain of being an artist in an indifferent and often cruel world. MORE

Movie lovers from around the globe had a grand time at the 13th annual edition of NOIR CITY: The San Francisco Film Noir Festival, held January 16–25, 2015. MORE

The 12th edition of the world's most popular film noir festival went international, exploding the long-held belief that noir stories and style are a specifically American phenomenon. MORE

NOIR CITY's 11th year festival kicked off with a tribute to guest of honor Peggy Cummins, legendary for her ferocious performance as outlaw Annie Laurie Starr in Gun Crazy. MORE

The 2010 NOIR CITY 8 at San Francisco's Castro Theatre broke its previous record for attendance. Many of the regular patrons declared that the 2010 edition of the world’s most popular film noir festival had the best “vibe” yet, as hundreds of loyal Bay Area attendees mixed with an amazing influx of out-of-state and international fans, in town for the festival’s duration. MORE

The theme of the NOIR CITY 7 running from January 23 through February 1, 2009, was Newspaper Noir, with many of the films set in the world of newspapers, publishing or radio. Programmers Eddie Muller and Anita Monga made a special effort to have NOIR CITY's nightly double bills reflect the traditional programming of theaters in the 1940s. MORE

Neither the brutally inclement weather, nor the traffic-stopping logistics of having Gus van Sant and (NC4 special guest) Sean Penn shooting a film right outside the theater could deter record crowds from packing the Castro Theatre during the 10-day festival spanning January 25 – February 3, 2008. Go here to read about the highlights of the NOIR CITY 6 including press links and photos..

Surround yourself in a miasma of social media darkness: join us on Facebook, Tumblr and Twitter for a complete immersion in the world of film noir through film stills, posters, film clips, brilliant insights, and more. 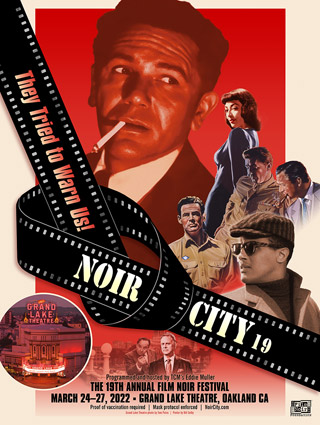 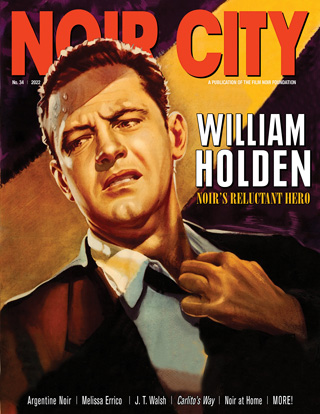 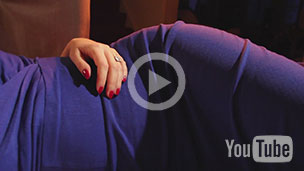